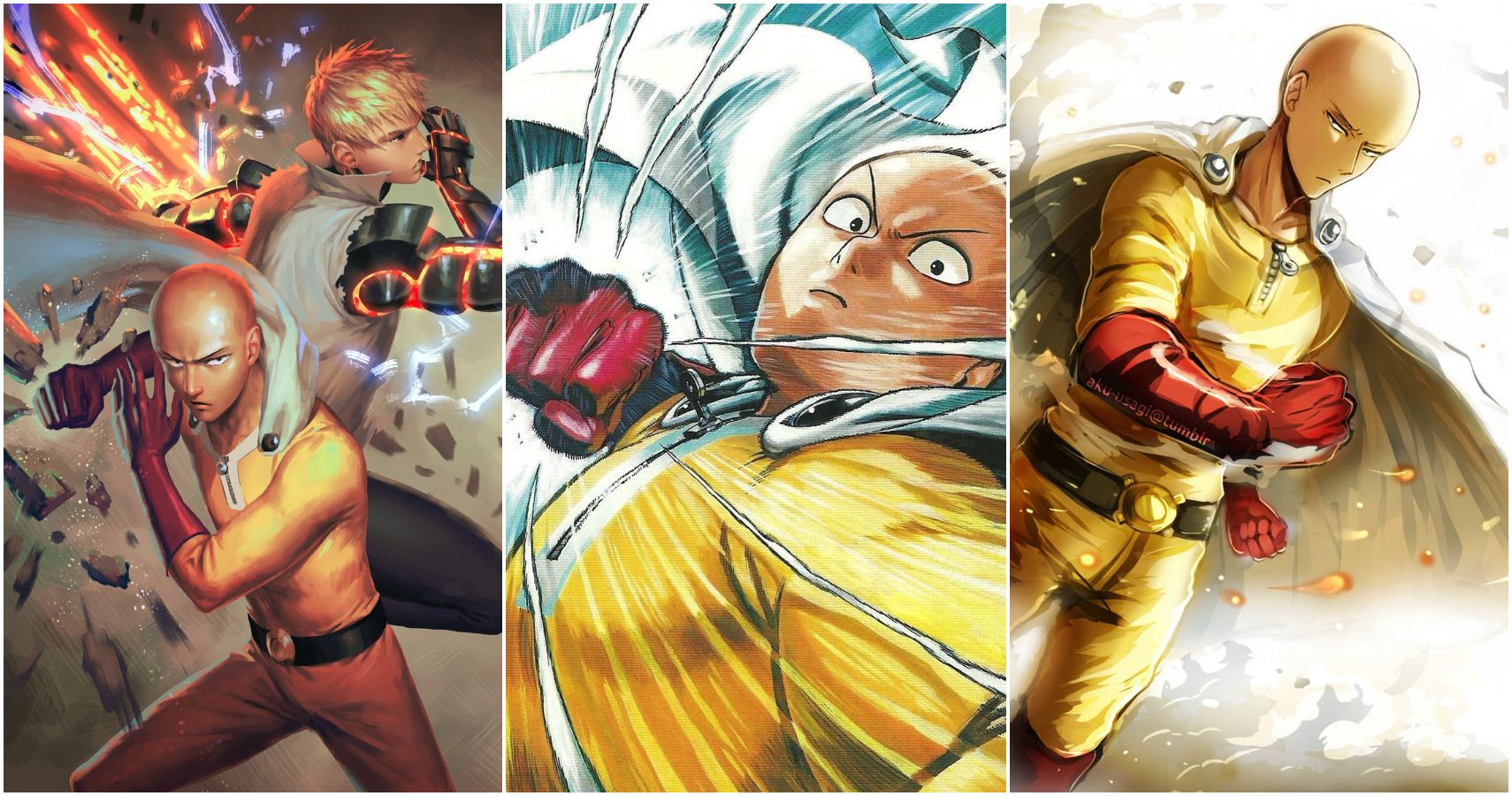 The popular anime series One-punch man focuses on Saitama, a masterful fighter who has spent his entire life in training and can now take out his enemies with a single punch. He becomes a “superhero for fun” as he tries to find a villain who can actually deal with his enormous power.

One-punch man started out as a webcomic, but its creative design and gripping story quickly garnered enough fans for an OVA to be released. Those fans stayed and grew, and now the show has a large viewership base. Some of its more art-inclined members enjoy using their talents to create fan art for the series, and what better character to do that than Saitama himself?

This piece Saitama fan art, designed by Deviantart user geniuscream, shows Saitama relishing in another victory, doing the legendary “walking away with an explosion”, as an awestruck Genos watches from the sidelines.

The colors are amazing and bring out the detailed character designs, and the mix of styles (the regular One-punch man style for Saitama but a chibi style for Genos) is cool too.

This simple and colorful piece of Saitama fan art was created by the artist Kyiv. The shading and colors are excellent, and the attention to detail on Saitama’s costume is amazing. Saitama’s face is also extremely well drawn, with expert design and stunning use of contrasting orange and purple tones.

RELATED: One Punch Man: 5 Anime Protagonists Saitama Would Get Along With (& 5 He Would Hate)

The beautiful backdrop creates a beautiful aesthetic to top off the room.

The use of lighting in this piece of Saitama fan art (which was designed by the artist hee_li_265791) is probably its most stunning detail, as the stunning backdrop casts a stark light on Saitama.

The “One-Punch Man” himself is drawn with superb precision, and the accompanying cityscape creates a relaxed environment.

This Incredibly detailed piece of Saitama fan art, made by the artist jenny mun, uses bold colors (including red, orange, blue, and yellow) and an easy-to-follow, yet beautifully intricate art style to create a masterpiece worthy of any gallery.

Saitama is drawn perfectly and with an extremely high level of precision for the anime, although the extensive use of shading and gradients gives it a much more complex – and, in a way, much more exciting – design.

This engaging piece of Saitama fan art, drawn with exceptional skill by the artist arcanedist, imagine the anime’s protagonist training for his next fight against the pouring rain, doing his signature “ready to strike” pose without batting an eyelid at the harsh climate around him.

Not only is this piece of fan art exquisitely drawn and wonderfully detailed (just look at the shading of his costume!), but it also perfectly captures his relentless practice mentality.

This room with impressive colors, almost cartoon-ish fan art of Saitama was drawn by a digital artist Maggie Venable. The lighting and shading are both stunning, with contrasting shades of yellow forming Saitama’s costume, and bright pinks and blues forming his cape.

The pose is perfectly drawn and Saitama’s wry smile gives us a glimpse of what’s to come.

This superb piece of Saitama fan art, created by an extremely talented internet artist evil-usagi, shows Saitama walking away from a cloud of smoke – presumably caused by his last fight – as his face contorts into a look resembling disappointment towards his enemy.

The extreme detail and shading make this piece even better, and it gives Saitama’s “anime” look a unique and distinctive level of depth.

In this piece of fan art, made by the artist ry-spirit, Saitama has no reason not to smile as he walks away from a defeated enemy, although let’s be honest – he knew he was going to win from the start.

The extreme level of shading and texture in this piece makes it so realistic it’s almost creepy, and the contrast between Saitama’s deep yellow outfit and his conquered green enemy – against a yellow and green background – creates an aesthetic visually transformative.

This extreme piece of Saitama fan art, made by the artist PenguinBorder, shows Saitama and Genos becoming action heroes, as Saitama shows off his masterful punches while Genos, not to be outdone, shows his powers no less flashy. The colors in this piece are outstanding and the soft contrast of yellowish colors against bluish colors creates a distinctly fierce vibe.

Saitama himself is very well drawn; its design is packed with detail while staying true to the anime’s more simplistic style.

This piece of amazing Saitama fan art was created by the artist Corphish2, and it shows Saitama with a hardened expression on his face – almost regretting that it had to happen – and pulling his arm back to deliver a knockout blow.

The good thing about this piece, in particular, is that it’s still done in the One-punch man style (for the most part), but the unique use of shading and color creates a much more creative and elaborate design.

NEXT: One Punch Man: 10 Absolutely Heroic Pieces Of Fan Art