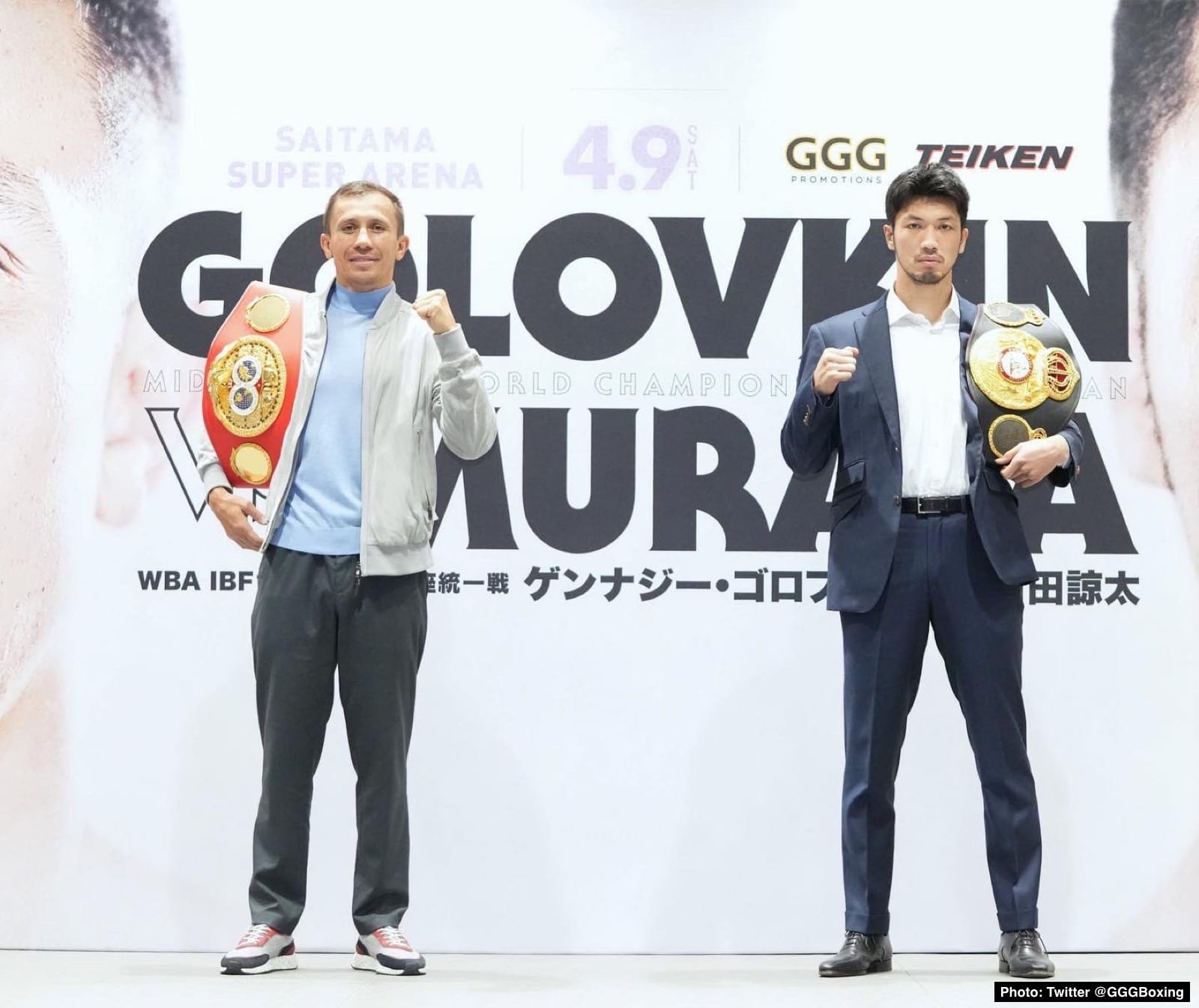 IBF middleweight champion Gennadiy ‘GGG’ Golovkin (42-1-1, 37 KOs) used his superior power and skill to take down and ultimately stop WBA champion Ryota Murata (16-3, 13 KOs) by a knockout in the ninth round Saturday night at the Saitama Super Arena in Saitama, Japan.

Golovkin dropped Murata with a huge right hand to the head in the ninth. Murata’s corner opted to stop the fight rather than let him try to get back up. As badly injured as Murata was, he wasn’t going to be able to keep fighting even if the corner didn’t throw in the towel.

Golovkin, 40, looked his age through the first four rounds, getting tagged multiple times by hard-hitting 2012 Olympic gold medalist Murata. However, in the sixth round, Golovkin injured Murata with a right to the head, and it changed the complexion of the fight.

From then on, Golovkin launched himself at an exhausted and injured Murata. In round eight, Murata was pinned against the ropes taking a beating from Golovkin, but the Japanese star barely made it out of the round.

Undercard results for Golovkin vs. Murata.

The general consensus is that Golovkin, 40, needs a Murata knockout to excite boxing fans to see him and Canelo fight in September in their trilogy match.

Needless to say, there’s huge pressure on Gennadiy to win tonight so he can get the trilogy match against Canelo, but he almost has to look good.

Gennadiy Golovkin is on site 📍

As Golovkin’s former coach Abel Sanchez said, it would be bad for him if he was punished against Murata and struggled to win.

Sanchez believes the boxing public will lose faith in Golovkin if he can’t stop Murata, as they won’t give him a chance to beat Canelo in September due to his age, poor performance and inactivity.

Golovkin will need to push a fast pace, go on the attack and not let go if he hopes to knock out Murata as the 2012 Olympic gold medalist can fire a shot.

Golovkin probably won’t be able to knock out Murata in one shot like he did with many of his former opponents.

Against the best fighters, Golovkin has always failed to stop them. He couldn’t knock out these fighters: Canelo Alvarez, Sergiy Derevyanchenko and Daniel Jacobs.

Murata is at least as good as Derevyanchenko and Jacobs, so it will take a lot of effort from Golovkin if he wants to knock him out tonight.

Many people think Golovkin is going to crumble after his 16-month layoff and is slightly rusty in his last fight against Kamil Szeremeta.

In this fight, Gennadiy seemed to take his time, not pushing the issue against his overmatched IBF mandatory.

Watching the fight, it felt like Golovkin was carrying Szeremeta and could have taken him out in the first round if he wanted to.

With Golovkin’s punching power, it’s not going to magically disappear after 16 months of inactivity and turning 40.

Kazakhstan-born Golovkin has only been punished in his fights against Kassim Ouma, Sergiy Derevyanchenko and Canelo Alvarez during his career.

IBF middleweight champion Golovkin just turned 40 last Friday and hasn’t fought since December 2020. Although he wants to get back in the ring much sooner, he’s committed to the fight against Murata .

Unfortunately, his talent took much longer than originally planned for the Golovkin-Murata fight to take place. Golovkin probably wouldn’t have taken the fight against Murata if he realized it would take this long to finally get rid of him.

In Murata’s case, his last contest was in December 2019 and has never fought anyone close to GGG’s caliber in his nine-year career.

You have to imagine Murata will be rusty tonight and not look as good as he did in his last title defense against Steven Butler.

Gennadiy ‘GGG’ Golovkin (41-1-1, 36 KOs) and Ryota Murata (16-2, 13 KOs) will shake off ring rust tonight when they meet in the headliners in front of a huge crowd at the Saitama Super Arena in Saitama, Japan. The battle action will be streamed live on DAZN.

Gennadiy and WBA champion Murata will meet in a unification bout, a contest that was supposed to take place last year. Golovkin needs a win over upset Murata (16-2, 13 KOs) to get a third fight with Canelo Alvarez in September.