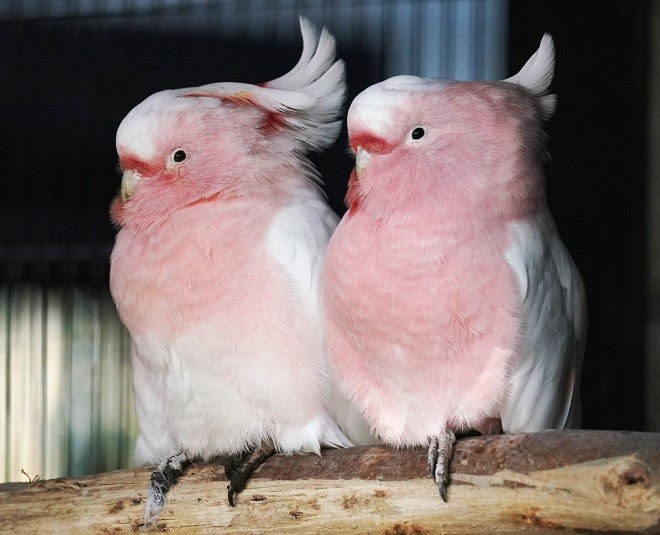 Editor’s Note: This is part of a series of videos offering an up-close perspective on the animal kingdom. A special 360-degree video camera system has been installed in zoos and other facilities to show how animals see their world as they interact.

Also visit our special LIVES IN 360 DEGREES page (http://t.asahi.com/360lives), where you can watch all previous videos.

With its characteristic colorful crest, Major Mitchell’s cockatoo is considered the most beautiful of all cockatoos.

Measuring around 40 centimeters in length, the large parrot species live in pairs or small groups in the arid interior regions of Australia.

It has pale pink plumage from face to belly, while its back and wings are white. Its crest has white, red, yellow and red bands.

A pair of Major Mitchell’s cockatoos are kept in the Campbelltown Wild Bird Forest in Koshigaya, Saitama Prefecture.

With an average lifespan of between 40 and 60 years, the birds only mate if they have good chemistry with each other, according to zoo keeper Shinji Hara.

The bird expresses its emotions by the way it spreads its crest.

“The ridge opens when excited or alarmed, and it closes when relaxed,” Hara said.

Birds tend to steer clear of their food when a video camera is present, as the lens apparently looks like a big eye to them.

But unexpectedly, the couple approached their meal with their crests fanned out shortly after seeds and fruit were served on two platters.

Campbelltown Wild Bird Forest was founded in 1995 to celebrate the 10th anniversary of the sister city partnership between Koshigaya and the Australian city.

About 300 birds of 23 species donated by Campbelltown are kept there for display.

Is there anyone stronger than Saitama in One-Punch Man?