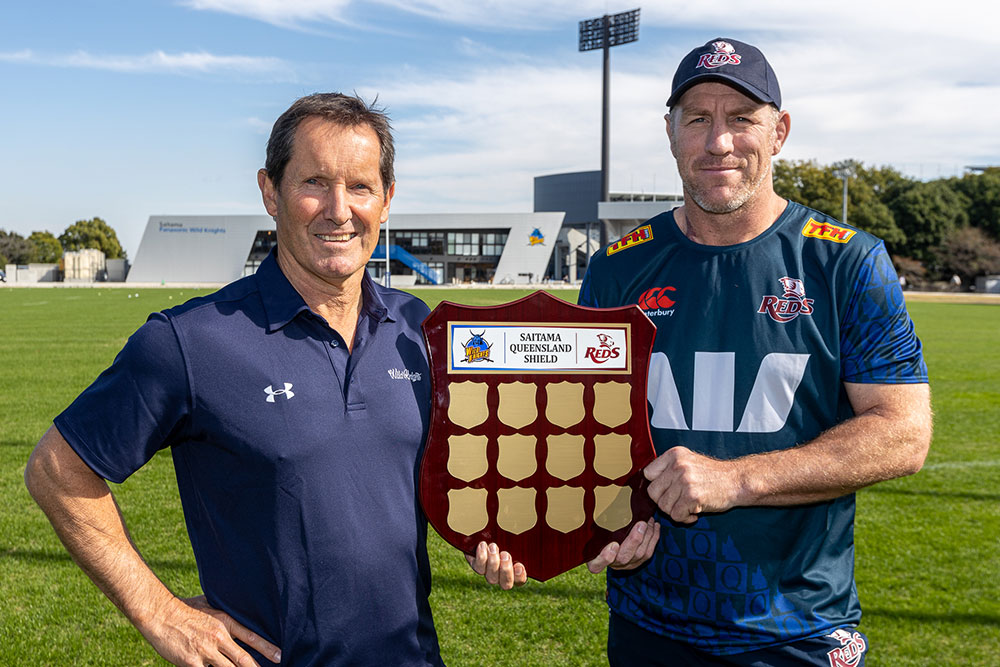 The Saitama-Queensland Shield will be contested for the first time on Friday night as the Queensland Reds and the Saitama Panasonic Wild Knights face off at Kumagaya Rugby Stadium in Japan.

After a false start due to Covid last year, the couple’s partnership came to fruition with Queensland currently being hosted by the Wild Knights on a tour.

Saitama Prefecture was Queensland’s first sister state relationship formed in 1984 and remains one of the most active of the many still operating between the two countries.

Like their respective governments, Queensland and Saitama also share a similar bond with a strong culture of community, connection and legacy instilled by head coaches Brad Thorn and Robbie Deans.

“This partnership is fantastic,” said Thorn.

“We are brother states – there is a bond there, and there is a strong bond between Saitama Panasonic and the Queensland Reds.

“Also, with Robbie Deans, my former mentor – the master, we have been friends for a long time now. I played under Deansy so there will always be a connection there.

Thorn’s former Crusaders coach has now become his Panasonic Saitama Wild Knights coaching counterpart, explained that a lot of work has gone into the partnership.

“It’s nice to be able to put something together that will stand the test of time,” Deans said.

“Brad comes in – he understands what the game is about, and these two organizations are similar, so this is a long-lasting event and these guys are very lucky to be part of this first.”

The Reds arrived in Japan on Wednesday last week and, through their partnership with Panasonic, have been based at Kumagaya Rugby Park – the Wild Knights’ headquarters.

“It was just well thought out by Iijima the general manager here and Robbie Deans,” Thorn said.

“Five pitches, a state of the art training centre, next door you have a 25,000 seat stadium and they have a hotel here for the public or visiting teams.

“I haven’t seen the same in the world – you know, I’ve played in England, Japan, New Zealand and Australia, so that’s super impressive.

“We are delighted with Ballymore and what is happening there with the new facility and the new stadium. I guess being here gives you a taste of what Ballymore will become with the completion of the facility (National Rugby Training Centre) next year.

After the National Rugby Championship (NRC) disbanded in 2019, there was a rugby development gap between club and Super Rugby level – something Thorn knew needed to be changed.

“There have been no matches, there has been a void for three years.

“You can train, but you have to play rugby games. You can benefit from training and your pre-seasons, but the best learning comes from playing.

“The NRC was great to have, and we brought so many players through it, but this tour gives players the opportunity to play but more importantly to play together to make that connection together.

“Having these Challenger Series games for the club players to play representational football and then go on tour and have a Queensland crowned game against Panasonic, that’s just good in every way.”

“It will be four games once we play Panasonic – four games we didn’t have, so it’s a great move for the Queensland Reds and Panasonic to come together.”

“There was a game in 1991 which was played by a very strong Reds side full of World Cup winners and they were successful this time against our current chief executive (Hitoshi Iijima), but those guys in will be talking for a while,” Deans noted.

The game will be an official capped game for Queensland and with eight non-contract club rugby players on tour, as well as some uncapped Reds squad members, there is an opportunity for a handful of potential starters on Friday night.

“They will remember this trip – especially this first one for a while,” Deans added.

“They’ve already had a game (against Kubota Spears) and the locals are very excited to have that game on Friday night.”

According to their head coach, the Wild Knights players are also looking forward to welcoming Queensland to Kumagaya.

“There will be a bit of anxiety, but that’s part of the good thing about this relationship because it takes both outfits out of their comfort zone a bit, and it just expands your people.”

Deans and Thorn were together at the Crusaders when they won the 2002, 2005, 2006 and 2008 Super Rugby titles with Deans as head coach and Thorn playing lock.

A decade later, Thorn followed Deans into the coaching world as he took charge of the Reds in 2018.

“He took on a group that had talent but lacked discipline. You can see his ethos shine through in the band and he’s just getting started.

“He did what I expected of him. He has a lot of history in the game. He has high expectations, and he expects that from his people as well.

The Reds and Wild Knights will battle for the Saitama-Queensland Shield at Kumagaya Rugby Stadium in Japan on Friday November 4 at 8pm AEST.