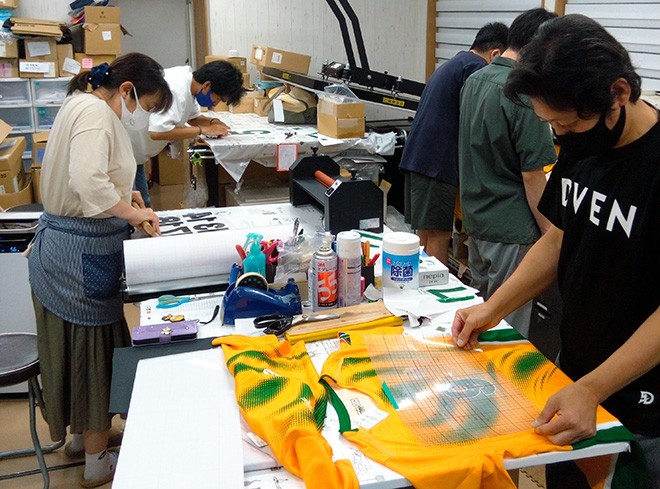 Without the help of the uniform and shirt maker, the South African players would have been left without a name or number on their backs.

The South African team’s road to the Olympics began in chaos, as two players and a member of team staff tested positive for the new coronavirus just days before their first match, which took place on Sunday. took place on July 22 in Tokyo.

Eighteen members were deemed to have been in close contact. Due to the enforced isolation, the team was unable to train and prepare properly to deal with the scorching heat and humidity.

Head coach David Notoane said before the game that he was more concerned about the health of the players than the game.

Generally in Japan, those deemed to have been in close contact must self-isolate for 14 days.

But Tokyo 2020 organizers have made a special case for athletes and will allow them to compete if they test negative six hours before an event.

The South African footballers passed their tests and rushed to the pitch at Tokyo Stadium in Chofu.

But the team was facing another crisis and were unsure if they could play until the last minute.

Because the team was concerned about the response to the COVID-19 outbreak, they were unable to prepare the shirts with the players’ names and numbers added.

MM1, based in Sayama, Saitama Prefecture, received an urgent phone call around 6 a.m. on the day of the game.

“Can you help us with our shirts? asked the caller, who was tied to the football team.

The company had worked for the Springboks, the famous South African rugby team, during the 2019 Rugby World Cup.

The football team relied on the connection and contacted the company.

MM1, in fact, had received a call from the team the previous evening. But after the conversation, the team concluded that they would solve the problem on their own.

But Mayumi Takahashi, 56, general manager of MM1, said she believed the team would call back and place the order.

So she was mentally prepared, she said.

The company received the uniforms before noon on game day.

But MM1 staff discovered that the color of the jersey number was different from that of the sample.

Company personnel carefully selected colors that would match team colors and added player names and numbers to the shirts using a heat press.

The process usually takes at least two days. To meet the emergency order, the company called in employees who were supposed to have the day off.

“If we did a shoddy job to complete the order on time but the numbers fell during the game, the whole world would be watching,” Takahashi said. “We were in a rush, but we made sure we did all our work properly.”

The team needed two jerseys for each player. But they wouldn’t be ready in time for kick-off, the company decided.

So MM1 first finished one shirt for each player and loaded about 20 of the shirts into a car the team had ready shortly after 6 p.m.

The stadium was about 25 kilometers from the company.

The jerseys arrived on site about 30 minutes before the procession of players entering the field.

Company employees paused their duties and watched the players wearing their yellow and green jerseys online.

“We made it,” the staff said happily.

Then they quickly returned to work to complete the second shirts, which were delivered to the team shortly after the start of the second half.

In a close and hard-fought contest, South Africa lost to Japan, 1-0.

When South Africa play Mexico on July 28, supporters will support them in a Sayama venture.

“We can’t cheer them on from the stands,” Takahashi said. “But we are happy that we were able to give them support behind the scenes. I hope the players will do their best until the end.

One Punch Man Saitama figure will arrive in 2022