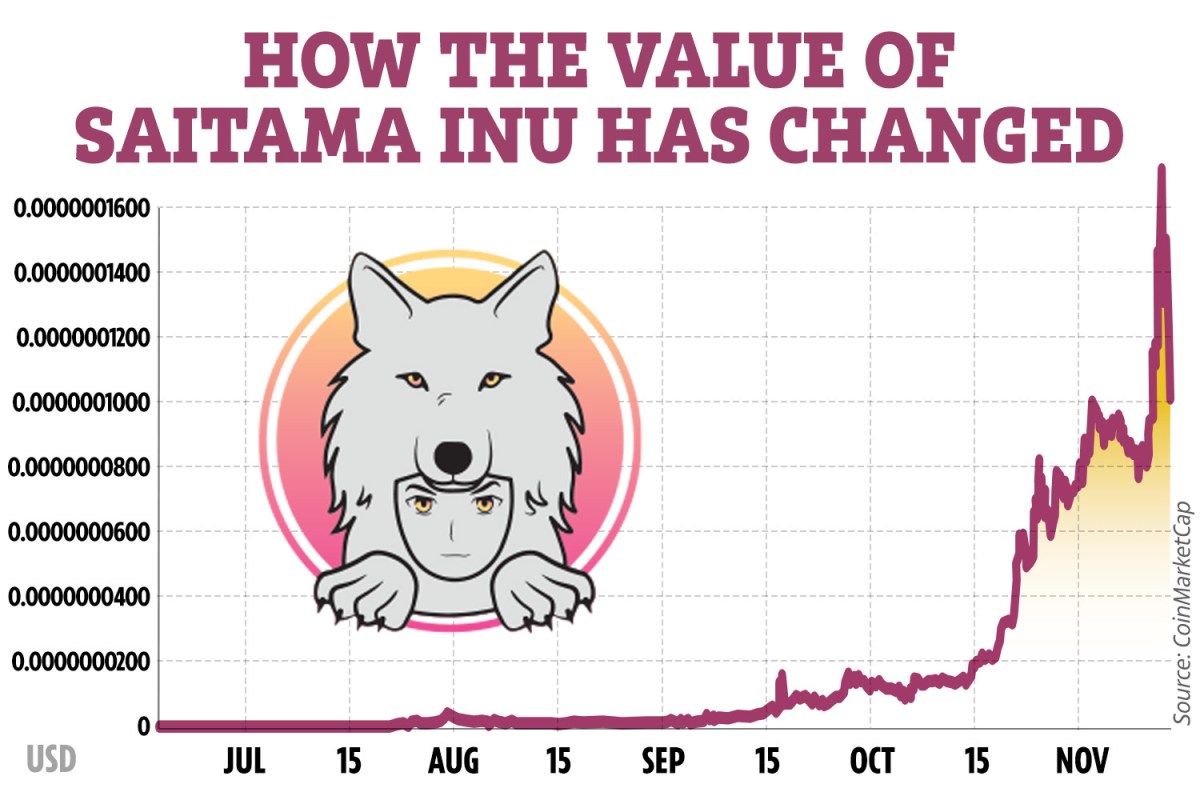 POPULAR dog meme cryptocurrencies have been quite the commodity this year – but you might not have heard of Saitama Inu.

But above all, be sure to keep some risks in mind when it comes to Saitama.

For one thing, it only launched this year. Newer cryptocurrencies are riskier than those that have been around longer, such as Bitcoin, and could make you more vulnerable to scams.

Plus, you could lose a lot of money quickly if you’re not careful. This is because the prices of cryptocurrencies can go down as well as up very quickly.

And be aware that the crypto space can be filled with complexity, so you need to understand what you are investing in.

What is Saitama Inu?

Saitama Inu is said to be named after a “ghost dog” that roamed Saitama Prefecture in Japan.

The Saitama Inu logo appears to depict a wolf surrounding a human face.

And due to the dog link and recent big gains, Saitama will draw comparisons to meme coins including Dogecoin and Shiba Inu.

“Tokens like Shiba Inu, Dogecoin and new winner Saitama are all part of the evolution of digital finance in their own way,” Chris Kline, COO and co-founder of Bitcoin IRA, told The Sun.

Like Shiba, Saitama operates as an ERC-20 token, meaning it runs on the Ethereum blockchain.

There is no known founder of Saitama and many other coin founders are anonymous.

Saitama describes itself as a “startup community owned and operated by our pool of holders”.

In total, Saitama claims to have a team of 40.

Currently, Saitama claims it is at “stage 3”, and says it has 80,000 holders and is “preparing” to list on major exchanges.

Steps 4 and 5 for Saitama are as follows, which include a market, decentralized finance (DeFi) wallet, and listing on more exchanges.

There have been rumors in the media that Saitama will soon be listed on Coinbase.

“Those familiar with the Uniswap platform can access it before any Coinbase listing of Saitama,” Kline said.

The recent plunge came after it was announced that plans to launch its crypto wallet SaitaMask had been delayed, Benzinga reports.

Given the recent favorable trends, some are wondering where Saitama’s price will end up by the end of the year.

Some say Saitama is yet another example of a “pump and dump” system.

Pumping and dumping is a scheme that aims to drive up the price of a security, while spreading false or misleading information.

“At some point the hysteria will die down and those who came early
will start taking profits,” said Adam Smith of The Crypto Adviser.

Adam Garcia, founder of investment news website The Stock Dork, noted that “every frenzy is sure to be followed by a nose dive.”

This is similar in a sense to what we have seen with Dogecoin and Shiba this year, as well as other meme coins and stocks.

Mr Garcia added: ‘The frenzy will almost certainly last another month or five.

“But the thing is, like any other coin, you should only invest the amount you are willing to lose.”

Meanwhile, the Coin Arbitrage bot is a bit more bearish for the rest of the year.

And as with any investment, returns are never guaranteed and you should only invest money that you can afford to lose.

A recent launch of new crypto coins based on the hit Netflix show Squid Game turned out to be a scam.

We pay for your stories!

Do you have a story for The US Sun team?

What makes Saitama such a fun hero to cheer on